May 6 :: a talk by Steve Dietz: "Between Media and Architecture" 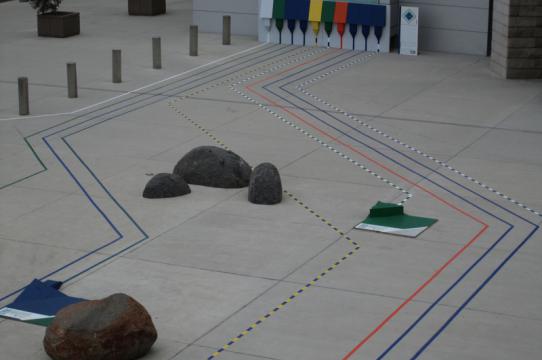 ATC@UCSC, in conjunction with the Art Technology, and Culture Colloquium of the Berkeley Center for New Media, presents this free lecture:

"Between Media and Architecture"

What are new capabilities for a responsive environment on an urban scale, which are neither media affixed to architecture nor architecture with built-in media but a new hybrid, “in-between,” connecting the limitless topography of the virtual and the site specificity of the physical?

Steve Dietz is a serial platform creator. He is the Founder, President, and Artistic Director of Northern Lights.mn. He was the Founding Director of the  01SJ Biennial in 2006 and served as Artistic Director again in 2008 and 2010. He is the former Curator of New Media at the Walker Art Center in Minneapolis, Minnesota, where he founded the New Media Initiatives department in 1996, the online art Gallery 9 and digital art study collection. He also co-founded, with the Minneapolis Institute of Arts the award-winning educational site ArtsConnectEd, and the artist community site mnartists.org with the McKnight Foundation. Dietz founded one of the earliest, museum-based, independent new media programs at the Smithsonian American Art Museum in 1992, where he was founding Chief of Publications and New Media Initiatives and editor of the scholarly journal, American Art.

Dietz has organized and curated numerous contemporary and new media art exhibitions. He is editor of Public Address and speaks and writes extensively about new media. His interviews and writings have appeared in journals, exhibition catalogs and book publications. Many of his writings are online at http://www.yproductions.com/writing/. He has also taught about curating and digital art at California College of the Arts, Carleton College, the University of Minnesota, and the Minneapolis College of Art and Design. He is currently serving as artistic director for the inaugural Twin Cities Northern Spark nuit blanche in 2011, and for ReGeneration, to be presented by the New York Hall of Science in the summer of 2012.

This talk will be immediately followed by a reception as part of the 2011 DANM MFA Exhibition, Permutations.

Primary Sponsors of the ATC@UCSC lecture series are: