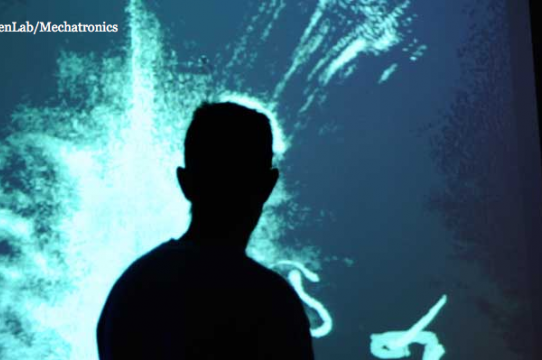 DANM '10 alums, Drew Detweiler and Lyès Belhocine of the the DANM OpenLab/Mechatronics close SonicPLACE and Soundwave ((5)).

Celebrate the ending of Soundwave with an outdoor party in the Minna Tunnel behind SF Chronicle Building between Mission/Howard and 5th and Mary Street. Featuring Lumisketch, a multimedia interactive art piece created by UCSC’s OpenLab’s Drew Detweiler & Lyès Belhocine that allows participants to paint and graffiti with light using any mobile device on the walls of the Minna Tunnel; video art curated by the Mobile Projection Unit; and supersonic dance party with DJ Tristes Tropiques (Haçeteria). The Soundwave party, produced in conjunction with Intersection for the Arts, 5M Project and 5M Placeworks, will light up one of many streets in the neighborhood that night, coinciding with the 2 Blocks of Art celebration in the 6th street art walk corridor and kick-off to the 24 Days of the Central Market Arts Festival.

Begin your adventure at the closing night of SonicPLACE, an innovative site-specific sound installation and exhibition created by Professor Jennifer Parker with the Digital Arts and New Media Program (DANM) Mechatronics Project team and OpenLab at the University of California Santa Cruz. As part of a research collaboration between artists and scientists, SonicPLACE activates place through participation with sound, mechanical devices and interactive play at the Chronicle Building in San Francisco.

The installations react to light, movement, and sound, capturing data and producing a tangible residue of the imprint we leave just by being human. SonicPLACE takes over the thorough-ways where people pass through: the front entryway, hallways, and even some of the windows of the building structure, involving both specific visitors to the site and random passers-by, and asking us, “How do we perceive our invisible connections to the world around us, and at what level are we even aware of them?” SonicPLACE aims to bring questions like these to the forefront of our consciousness, and show us that even when we believe we’re moving in isolation, we are still interacting with the world as a whole.

Drew Detweiler is an interdisciplinary artist that brings his experience as a Theater of the Oppressed activist to interaction design. His intuitive interfaces encourage social interaction and participatory play in public spaces.

Lyès Belhocine is an African artist whose work is at the intersection of design and technological puzzling. His interactive installation work often explores relationships between people, history and multicultural dialogue through the use of music, video and other visuals.

Jennifer Parker is the Director and Co-founder of Openlab and a Professor of Art and Digital Art and New Media at the University of California Santa Cruz. Parker’s research is rooted in sculpture, interactive art, new media, and kinetic art, including cross-disciplinary and collaborative research. Current projects explore new methodologies for art making that engage innovative, creative and collaborative research with art, community, design, technology, and science.

Benjamin Carpenter is an interactive Artist/Fabricator/Teacher who works at the corner of our industrial heritage and the momentum of contemporary media. His work is a meditation on life in the 21st century, the history that led to it and the future that lies ahead. He maintains an active role in his community by teaching at the Crucible and has also guest lectured at the major art schools in the Bay Area. He has shown his work locally, nationally and internationally. Backbone is the moniker under which he does commissioned work.

Chris Cravey’s sculpture-based media is focused on engagement with the past. Over the last few years, the fabrication of metal and wood based pieces has driven this pursuit. His work creates layered links to the past, begging questions of practicality and modern significance of historical items in relation to the human experience.

Jasen Levoy is a fabricator and designer of machines for interactive art and kinetic artworks within the Mechatronics project group at UCSC. He is interested how sets of cams, cogs, belts, gears, and motors can be utilized by artists to create collaborative endeavors of culture and public engagement.

Andre Marquetti is a UCSC doctorate student in computer algorithmic music and has worked for the most part as a composer, saxophonist performer in Chicago. He holds a Master degree in experimental composition from Wesleyan University where he studied with Anthony Braxton and Alvin Lucier.

Leslie Thompson is a developing artist interested the Mechatronics group as fabricator who specializes in sculpture. She has experience with welding, sewing, wood, and other sculptural methods. She considers herself an “on call” fabricator and is willing to do what it takes to make someone else’s mental picture a reality.

Oliver Whitcroft is an audio-visual undulation manipulator focusing in the realms of radio, analogue amalgamation and image concoction. He studies art and music and has spent time with photography, video, animation and drawing. Pixel and grain interpolations of the world are similar in approach to much of the sample heavy compositions and live music that he creates with his MPC 2000xl sampler.