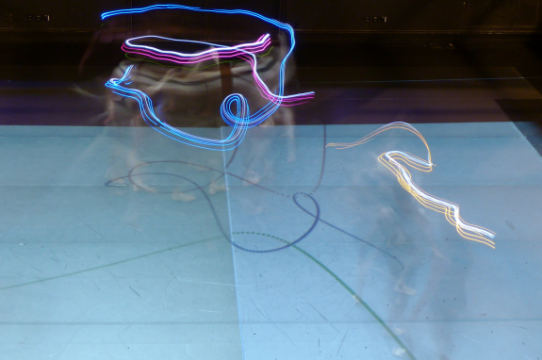 Three dancers in illuminated costumes create a live video visualization of the elliptic-hyperbolic solution to the classic Pythagorean three-body problem. A custom light tracing application detects light emitted from LEDs on the dancers’ soft circuitry costumes to create a visual model of their trajectories across the 2D plane of the stage. This realtime graphic visualization is projected on a large screen behind the stage in order to provide the audience with a birds eye perspective of their complex motion.

The use of digital technologies presents challenges for contemporary choreographic methods as data visualization guides movement through performative space on scientifically accurate trajectories. Live accompaniment from three musicians enhances physical performance as each body is interpreted through movement and sound. Feelings of longing, connection, and isolation are intertwined as the bodies are flung apart by the same gravitational forces that draw them together.

Three Bodies is an interdisciplinary collaboration between University of California, Santa Cruz professors Greg Laughlin (Astrophysics), Ted Warburton (Dance), Karlton Hester (Music) and  DANM lecturer and alumni Drew Detweiler and Lyès Belhocine. The group is actively engaged in an on going research project to create a live visualization of the Pythagorean Three-Body problem through music, dance, and interactive technology.

Commissioned by ZERO1 with support from the James Irvine Foundation