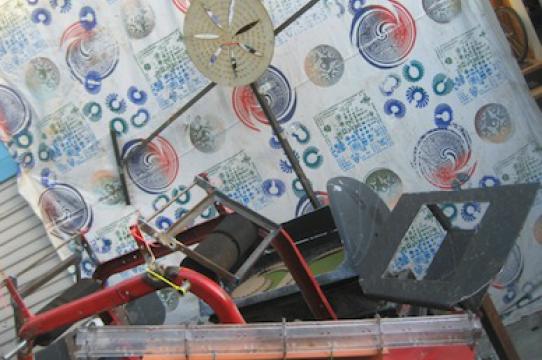 DANM TUESDAYS 4-6 allow the DANM community to come together each week to listen, learn and share our work and play. During the spring quarter the series will include a rich line-up of student presentations, visiting artists, and a workshop. All meetings are held in DARC 206, unless otherwise indicated.

Derek Franz has undergraduate degrees in psychology and philosophy and is interested in the human condition. He repurposes machines and invites the visitor to see new perceptions of highly interactive systems. He makes his Disinterest Action Machines, out of meat, which use touch control systems to deconstruct the person-computer relationship.

eve Warnock was born and raised in Ohio.  She is a multi- media artist working in film, performance, costume, set, and new medias.  She is a co-creator of Queen Mae and the Bells, (modern opera troupe), producer of Homeslice, (stop motion animation), director of Seekago (a series of five films), and creator of Denizen (sound based performance).  She has designed fashion for AVEDA and costumes for Times New Viking music Videos.  She is currently gaining her Masters of Fine Art at the Digital Arts and New Media program at the University of California Santa Cruz, where she is learning electronics and computer programming languages, as well as designing a curriculum.

Andrew Siller produces electronic music and games with an emphasis on the remix. He started remixing songs with spreadsheet-like software that drives a passion for tabular data. His most recent work draws upon a particular kind of data: Nutrition Facts. Cycles of supply and demand motivate his focus on rhythm; pro wrestling, working out and vegan food in his current game called, Jakk in the boxxx. Andrew is currently a graduate student in the Digital Arts and New Media (DANM) program at the University of California Santa Cruz and is interested in interdisciplinary participatory culture.