Geert Lovink: Unlike Us: Alternatives in Social Media after Snowdon: Issues in Critical Internet Research 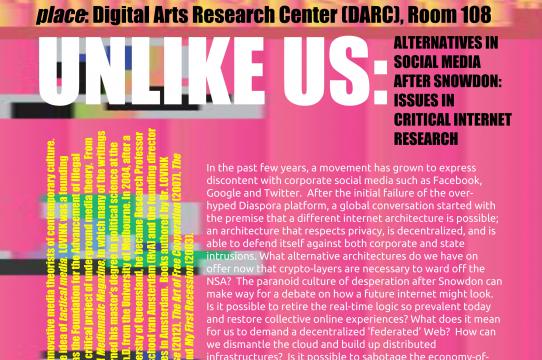 acknowledgements: Geert Lovink's visit to the University of California, Santa Cruz was made possible by generous support from the Arts Division, the Visual & Media Cultures Colloquium, the History of Art & Visual Culture Department, the  Film & Digital Media Department, and the Digital Arts & New Media Program.  For more details, contact wsack@ucsc.edu

bio: Geert Lovink is one of the most innovative media theorists of contemporary culture.  He is known for co-developing the idea of tactical media.  Lovink was a founding member of ADILKNO, also known as the Foundation for the Advancement of Illegal Knowledge, founded in 1983 as a critical project of underground media theory.  From 1989–94 Lovink was the editor of Mediamatic Magazine, in which many of the writings of ADILKNO first appeared.  He earned his master's degree in political science at the University of Amsterdam and a Ph.D. from the University of Melbourne. In 2004, after a postdoctoral position at the University of Queensland, he became Research Professor of Interactive Media at the Hogeschool van Amsterdam (HvA) and the founding director of the Institute of Network Cultures in Amsterdam.  Books authored by Dr. Lovink include Networks Without a Cause (2012), The Art of Free Cooperation (2007), The Principle of Notworking (2005), and My First Recession (2003).

title: Unlike Us: Alternatives in Social Media after Snowdon: Issues in Critical Internet Research

abstract: In the past few years, a movement has grown to express discontent with corporate social media such as Facebook, Google and Twitter.  After the initial failure of the over-hyped Diaspora platform, a global conversation started with the premise that a different internet architecture is possible; an architecture that respects privacy, is decentralized, and is able to defend itself against both corporate and state intrusions. What alternative architectures do we have on offer now that crypto-layers are necessary to ward off the NSA?  The paranoid culture of desperation after Snowdon can make way for a debate on how a future internet might look.  Is it possible to retire the real-time logic so prevalent today and restore collective online experiences? What does it mean for us to demand a decentralized 'federated' Web?  How can we dismantle the cloud and build up distributed infrastructures?  Is it possible to sabotage the economy-of-scale and winner-takes-all rules of the internet that have so far only been beneficial to venture capital?