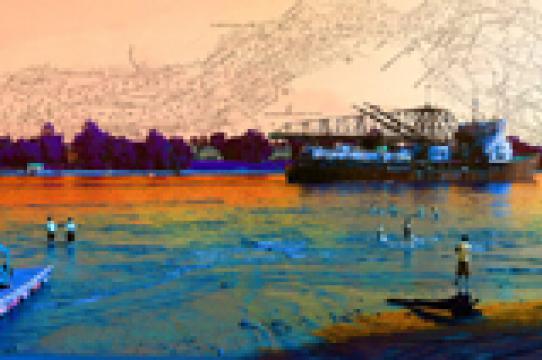 Memorial Day on the Delaware

Candidates for the new Associate Professor and DANM Director position will give public presentations on their work as part of their on-campus interviews. The events are open to the public. There are three candidates presenting over three weeks:

Critical Inquiries and the Digital Imaginary

Roderick Coover will present samples from recent works such as Estuary, ToxiCity: A Climate-Change Narrative and Hearts and Minds: The Interrogation Project. These works bridge creative and critical methods to engage issues of climate change, human rights, memory and the sense of place. Estuary and Toxicity integrate writing, mapping, photography, mobile media and combinatory video as well as scientific and humanities research to look at impacts of sea-level rise on industrial and post-industrial landscapes in the US Atlantic and Europe. Hearts and Minds is an interactive, immersive, Unity-based work designed for CAVEs and Oculus Rift; the project foregrounds veterans' testimonies of US military enhanced interrogation practices and human rights abuses committed during the Iraq War, often by young and ill-trained soldiers who never entered the military to become torturers and find themselves struggling to reconcile the activities they were asked to do. Attention will be given to ways of expanding or transforming relationships between theory and practice and between process and presentation. Attention will also be given to how such approaches may expand ways that students envision the learning process and may transform relationships between universities and the diverse communities they serve.

Roderick Coover is the creator or co-creator of works of digital, interactive and emergent cinema as well as visual research, documentary film and critical media projects and scholarly publications. He is the author and editor of numerous publications including the book, Switching Codes: Thinking Through Digital Technologies in the Humanities and Arts (University of Chicago Press). The recipient of Melon, LEF, Whiting and Fulbright awards, Coover is Director of the Graduate Program in Film & Media Arts at Temple University and Founding Director of graduate programs both in mediaXarts: Cinema For Emerging Technologies And Environments and in Documentary Arts & Ethnographic Practices. http://www.roderickcoover.com.