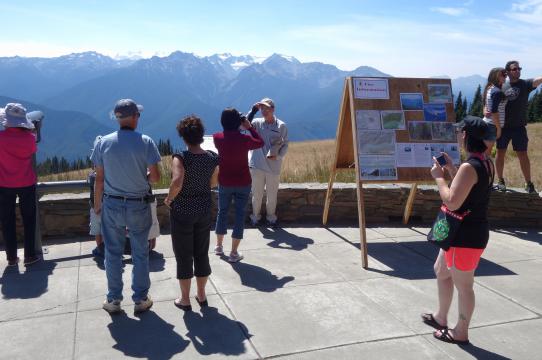 Internationally acclaimed artist Subhanker Banerjee is presenting "Trouble in Paradise: Photography, Visual Ecology, and Extraction in Olympic National Park" as part of EXTRACTION, a research program exploring the industrial operations which abuse natural resources and thrive off of labor exploitation and racialized impoverishment.

This event is FREE and open to the public. Metered parking is available in the Performing Arts lot.

For this talk, Subhankar Banerjee will introduce his forest series photography “Trouble in Paradise.” Situated in the Olympic National Park and the Peninsula in Washington State that, so far has eluded any critical and significant artistic engagement, the primary aim of the series is to update visual depictions of nature from the 19th and 20th centuries to our time in the 21st. Instead of depicting National Park as a place of national pride, of reverence, for leisure and aesthetic pleasure, or to seek solace and silence, the series reframes “America’s Best Idea” as a mirror onto which the detritus and hubris of industrial progress is reflected with clarity. The talk will begin with a brief history of the park, which includes crimes against Native American communities through settler colonialism, acrimonious and protracted environmental campaigns to protect the last remaining old growth coastal temperate rainforests from logging, and an ongoing long environmentalism campaign to decolonize nature. Even though “Trouble in Paradise” was initiated with the intention to visually document recent climate change impacts, which includes drought-induced rainforest fire in 2015 and mass die-off of sea stars that started in 2013, but the project took a sharp turn toward something else, to apprehend how do the tourist, the Park Service, and inhabitants of the area, react and respond when disasters arrive at the doorstep. The inquiry proved illuminating: visitation to the park went up to a historic high; loggers and nature lovers happily shared the road largely oblivious to “Fire Ban” and “Burn Ban”; and “Fire Information” didn’t dissuade tourists from snapping selfies. But a new realization also emerged—photography is as much about reading as it is about seeing, and therein lies a glimmer of radical hope.

A self-taught artist and writer and an accidental activist, Subhankar Banerjee is Lannan Chair of Land Arts of the American West and Professor of Art and Ecology at the University of New Mexico. His photographs have been exhibited widely, including at the Amon Carter Museum of American Art, Nottingham Contemporary and Biennale of Sydney; and writing published in anthologies and progressive media, including Ecocriticism and Indigenous Studies and TomDispatch. Over the past sixteen years his work primarily addressed resource wars, climate change, and indigenous human rights in the Arctic, and contributed to defeating and/or slowing down oil and gas development in some of the biologically and culturally significant places, including the Arctic National Wildlife Refuge, Teshekpuk Lake wetland, and the Beaufort and Chukchi seas. He collaborates closely with the Gwich’in and the Iñupiat indigenous communities in Arctic North America. Banerjee is editor of Arctic Voices: Resistance at the Tipping Point. He has been working on a long-term visual ecology (Arctic, desert, forest) trilogy on (non)human.

*All lectures and screenings are on Tuesday evenings, 5:30 -7:30 PM, in DARC 108 at UC Santa Cruz unless otherwise noted.

May 12-13 (Friday at the Multi-Purpose Room at College Nine and Ten; Saturday at the Nonviolent Resource Center)