The level of abstraction, color palette, and sensation of movement are notably different from image to image and series to series, but overall the work is aesthetically united by the distinctly digital style. 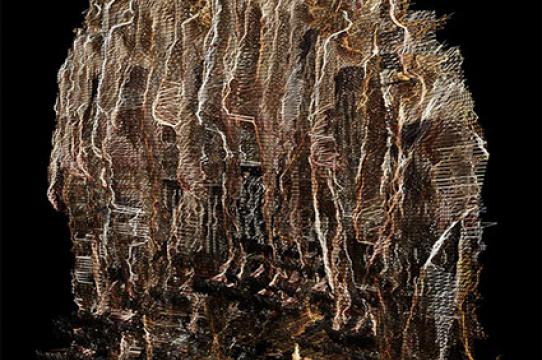 Works in the Suspended Motion Series vary in appearance across mediums and series, but always incorporate a partially abstracted human figure depicted in multiple stages of motion simultaneously. Over the last year, I established a methodology for capturing performances and translating them to video and still images. The level of abstraction, color palette, and sensation of movement are notably different from image to image and series to series, but overall the work is aesthetically united by the distinctly digital style of material generated using the experimental 3D visualization system RGBD toolkit. The images that are the result of my motion-capture studies are rendered as simulated 3D wireframe meshes that incorporate digital video information so they appear computer-generated, but with the coloration and shading from video of a real subject.

Series I videos and prints represent my initial experimentation with the RGBD toolkit system, and are denoted by a rich, dark color palette of burgundy, black and gold. The prints were created by compositing together the individual frames from short video sequences where I performed repetitive motions and gestures, effectively compressing the record of those performative actions into singular images.

Series II is a short music video demo for the Flume song Holdin’ On that I performed in and produced in the Summer of 2013, and from it developed a series of colorful prints on metallic film including two 12 foot long scrolls. The color in each frames shifts in sync with the beat of the song, and the prints reflect this sensation of dance performance with their elaborate layering in a hyperreal color palette.

The third series of works is based around video material developed for part of my DANM MFA art exhibition installation, Suspended Motion Series III: Descending. This video brings full-circle the inspiration from and reference to chronophotography and Futurist style by recreating Marcel Duchamp’s 1912 painting Nude Descending a Staircase in a contemporary context. Descending is an interactive video and sound installation where viewers effect the coloration and speed of playback of projected video with their presence in front of the screen. In this case, the figure is mobilized and maintained in an infinite state of descent, and viewers have the opportunity to engage with the material using their own body. Prints in this series depict small groupings of frames deliberately arranged to form distinct arcs of motion.