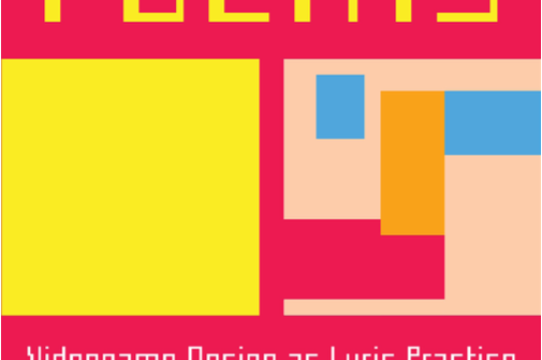 Jordan Magnuson (DANM Class of 2019) has evolved his MFA thesis into a book manuscript that has passed peer review and will be published by Amherst College Press in early 2023. The book, titled Game Poems: Videogame Design as Lyric Practice, will be the first book in a new series titled “Electronic Communities of Making,” edited by Anastasia Salter and Stuart Moulthrop. Jordan’s DANM committee included Noah Wardrip-Fruin (Chair), Michaël Samyn, and Susana Ruiz.

From the 2023 Amherst Press Catalog:

Scholars, critics, and creators describe certain videogames as being “poetic,” yet what that means or why it matters is rarely discussed. In Game Poems: Videogame Design as Lyric Practice, independent game designer Jordan Magnuson explores the convergences between game making and lyric poetry and makes the surprising proposition that videogames can operate as a kind of poetry apart from any reliance on linguistic signs or symbols.

This rigorous and accessible short book first examines characteristics of lyric poetry and explores how certain videogames can be appreciated more fully when read in light of the lyric tradition—that is, when read as “game poems.” Magnuson then lays groundwork for those wishing to make game poems in practice, providing practical tips and pointers along with tools and resources. Rather than propose a monolithic framework or draw a sharp line between videogame poems and poets and their nonpoetic counterparts, Game Poems brings to light new insights for videogames and for poetry by promoting creative dialogue between disparate fields. The result is a lively account of poetic game-making praxis.

Jordan Magnuson is an independent game designer and new media scholar whose games explore subjective experiences, difficult topics, and complex emotions. His work has been featured by Wired, PC Gamer, Le Monde, and others, shown at festivals and exhibits around the world, and nominated for awards like the New Media Writing Prize and the IndieCade Grand Jury Award.