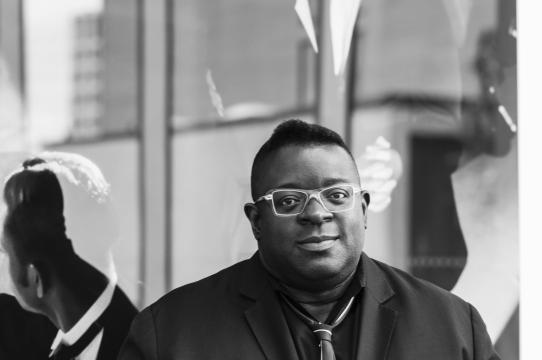 - By Nina Sazevich, originally published at the UCSC Newscenter on June 07, 2022

On the occasion of her Platinum Jubilee, Queen Elizabeth released her 2022 Birthday Honours List on June 1, and among those to receive special honors was UC Santa Cruz Distinguished Professor of the Arts Isaac Julien, who was granted knighthood. The Queen’s Honours List noted that Julien had received his knighthood for services to diversity and inclusion in art.

Julien, who had previously received the title Commander of the Most Excellent Order of the British Empire (CBE) in 2017, is a critically acclaimed British filmmaker and installation artist. His multi-screen film installations have been widely presented in major museums and galleries around the world including TATE, the Museum of Modern Art in New York, Centre Georges Pompidou in Paris, MAXXI Museum in Rome, and many others. Julien’s work has been exhibited in the world’s most prestigious contemporary art exhibitions including the Venice Biennale, Performa, documenta, and more.

Julien’s art practice breaks down the barriers between different artistic disciplines, drawing from and commenting on film, dance, photography, music, theatre, painting, and sculpture, uniting them to give voice to the experiences of disregarded, often black, and queer narratives.

His 1989 drama-documentary Looking for Langston, a poetic exploration of Langston Hughes and the Harlem Renaissance, first garnered Julien widespread international attention, while his 1991 debut feature Young Soul Rebels won the Semaine de la Critique prize at the Cannes Film Festival. Recent works have included the 2019 ten-screen installation Lessons of the Hour, a meditation on the life and times of Frederick Douglass, that just recently entered the collection of the Museum of Modern Art in New York.

Julien is one of just a handful of black British artists to be knighted. Filmmaker Steve McQueen and painter Frank Bowling have both received the award in recent years.

“Getting the knighthood at this particular time is a great honour, and I hope it shines a light on the importance of questions of diversity and inclusion for the arts,” says Julien. “The visual arts have led the way around these questions, and my work as a professor and educator at Santa Cruz is a central aspect of my practice. It is, therefore, essential that the arts maintain their pivotal role at universities globally in light of the current impediments they are facing. We can only hope that those who want to lead change in education will recognise the importance of the arts in this crucial moment of social transformation.”

Julien, together with independent curator and writer Mark Nash, the former head of contemporary art at the Royal College of Art in London, established The Isaac Julien Lab at UCSC when they formally joined the faculty in 2019. Students draw upon moving and still images to create visual and sonic languages for production, exhibition, and installation and have the opportunity to assist Julien with project research and production in both California and London, where the artist has a studio. Several of Julien’s projects have been developed out of the Lab at UCSC, including his latest, Once Again…(Statues Never Die), opening this month at the Barnes in Philadelphia.

“Our Lab, dedicated to excellence in creating and curating the moving image, has fantastic students from across campus disciplines and from around the world. They are doing significant projects that need wider support and recognition!” says Julien. “Starting in 1994, when my partner Mark Nash and I were first invited to teach courses in the History of Consciousness Department by luminaries like Teresa de Lauretis, I have always seen UC Santa Cruz as a special and unique research and teaching institution. We met people here who we had long admired, such as Angela Davis who inspired my 1986 film The Passion of Remembrance, James Clifford, artist Victor Burgin, Donna Haraway. Today we have excellent contemporaries as well, terrific artists and scholars, and the Arts Division’s Dean Celine Parreñas Shimizu who has proudly championed diversity and inclusion. All have had a lasting impact on our Lab, as well as contributing to my work as an artist and filmmaker and to my teaching.”

"Distinguished Professor Sir Isaac Julien’s work inspires us to achieve the consciousness that the arts singularly enable,” says Parreñas Shimizu. "At UCSC, he demonstrates immense generosity to his students, sharing the global regard for his work to launch the next generation of scholars and artists. We celebrate the generosity of our dear colleague exemplified in this great honor."