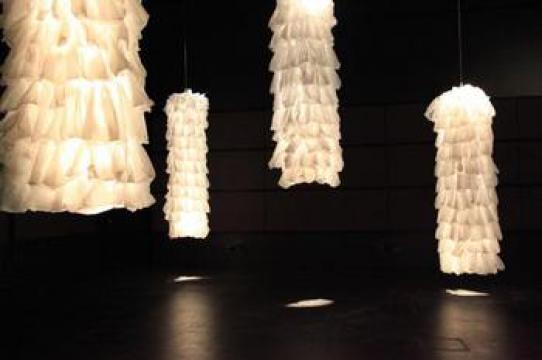 Denizen is a performance, sound, and video projection based work that draws inspiration from local native mythology. It is a two-part piece that explores life and the therefore imminent approach of death; using the Coyote as a central character. The coyote is a native to the California area and has prospered through all the human developments. Even though its natural habitat is being reduced, its population has grown by assimilating to the human culture and living off human bi-products. In the time of the Ohlone people, native to the bay area, the coyote was a main figure of their mythology; portrayed as a character of wit and cunning and contributing to the creation of humankind. The coyote is an instigator, and an animal that has the ability to adapt, while remaining wild and uncontrolled. Through song and movement, an expression of origin and ancestry will be explored – illustrating successes, failures, and tactics of survival. Silicon Valley, on the leading edge of technology, modernity, and progress, gives context to Denizen, a piece questioning: Do we adapt our materials and knowledge to re-unite with our animal ancestry, or do we continue our current path, separating ourselves further and therefore creating an alien nation?

eve Warnock was born and raised in Ohio and graduated with distinction from the Ohio State University with a Bachelors degree in German and Art. She works in many different mediums, ranging from oil painting, to performance, to costume and set design, to digital medias. She is co-creator of Queen Mae and the Bells, a nationally touring performance group. eve is also creator of Doctor Sustain, a solo performance that experiments with character development, and shape shifting. She is currently in the UCSC Digital Arts & New Media MFA program.

Tina Matthews’ distinct vision and seamless craft are realized in her pursuits as a costume designer, musician, performer, and fine artist. Along with eve Warnock, Tina is a founding member of the avant-garde performance group, Queen May and the Bells. Born and raised in the Midwest, she graduated with a BFA from the Columbus College of Art and Design in 2003 and has since exhibited and performed nationwide.

Colin McDonald examines expectations and conventions through the use of Video, Sound, Performance, and Sculpture. He received his BFA in Art & Technology from the Ohio State University in 2008 and has since been active as a videographer, media archivist, editor, projectionist, art handler, and web designer. He exhibits his work in festivals and exhibitions internationally.

Commissioned by ZERO1 with support from the James Irvine Foundation

(e)MERGE is the ZERO1 Biennial street festival featuring outdoor projects by over 100 emerging artists whose innovative and experimental works engage with a range of radical new technologies. The assistant curator is HAVC PhD candidate, Lily Alexander.