Afrofuturism Then and Now 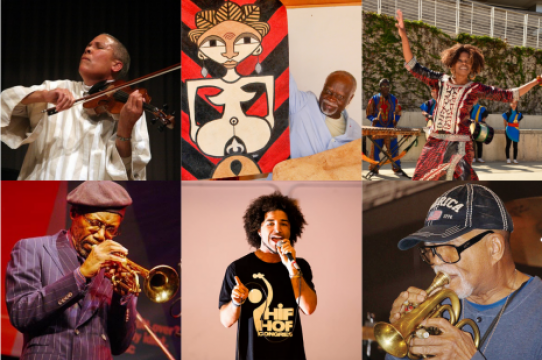 Conceptualized in the 1950s by cosmic philosopher and jazz giant Sun Ra, Afrofuturism is a wide-ranging social, political, and artistic movement intent on imagining a world where African-descended peoples and cultures can live and flourish. Join us for a discussion with musicians, artists, and dancers working in the Afrofuturist tradition about their creative endeavors aimed towards a better future.

This event is collaboratively produced with Professor Karlton Hester, Music, and Professor Gerald Casel, Performance, Play, and Design
​
India Cooke is a Grammy-nominated, national and internationally renowned violinist, composer, and educator. She plays a range of genres from improv, jazz, to classical. She has played with legendary musicians such as Sarah Vaughn, Ray Charles, Tony Bennett, and K.D. Lang, as well with Sun Ra, Pharaeoh Sanders, George Lewis, and Amiri Baraka. Her debut album, “Music and Arts, India Cooke - Redhanded” was nominated for the Grammy’s in 1997, bringing her work to critical acclaim. As a classical musician, Cooke has performed with the San Francisco Bay Area Symphony and opera orchestras, chamber ensembles, and Broadway shows. As an educator, she currently teaches at Mills College in Oakland, the San Francisco Community Music Center, and her private studio, India’s Music Room.
Mandjou Koné is a dancer and dance educator. Born into the Koné family, a Griot family in West Africa, betwen Burkina Faso and Mali renown for their tradition of recording events and passing history down generations, she was invited to the United States to help translate a documentary about the last 40 years of her family’s musical tradition and history, titled Great Great Great Grandparents’ Music, produced by Taale Laafe Rossellini. She has danced and performed with the National Ballet of Burkina Faso and toured with her brother’s group, Surutukunu, and has been a dance teacher throughout the United States for the past eleven years and is currently a dance lecturer at UC Santa Cruz. She was honored with the Calabash Award in Santa Cruz, CA in 2003.
Emmanuel Etolo is the President of the Board of Directors of the Plastic Arts, Ministry of Culture in Cameroon. His artworks are realized from the bark of the Obom tree, and he has had several exhibitions in San Francisco, the West Indies, and France.
Charles Tolliver is a jazz trumpeter, composer, and co-founder of Strata East Records, based in New York City. Born in Jacksonville, FL, Tolliver made his musical recording debut with saxophone giant Jackie McLean in 1964 with Blue Note Records and has performed and/or recorded with renowned artists such as Roy Haynes, Hank Mobley, Willie Bobo, and The Gerald Wilson Orchestra. He has been awrded the Downbeat Critic’s Choice for best Trumpet and Best Large Ensemble of the Year 2007 by The Jazz Journalists Association with his group MUSIC INC. Tolliver is noted for perfecting his individual and distinctive sound of tradition and improv in his music, setting him apart from other trumpet players. His most recent big band CD “Emperor March” was recorded live the the Blue Note in New York City  and was released in 2009.
Nelson Harrison, PhD is an accomplished musician, trombonist, jazz historian, and Pittsburgh Jazz leader. Harrison has played with numerous legendary musicians such as trombonist of the Count Basie Orchestra, Kenny Clarke, Billy Eckstine, and recorded with Walt Harper and Nathan Davis. He has received a Ph. D. in clinical psychology  is currently active with The Blues Orphans, Wee Jams, and his groups The Work According to Bop, Jazz ‘N Jive, Dr. Jazz and the Salty Dawgs, Blue to the Bone, and Nelson Harrison and Associates. He is cited in the Marquis publication Who’s Who in the East (1979) and has received the 2008 Legacy Arts Project Keepers of the Flame Award, the 2008 Build the Hill Award, the 2008 MCG Jazz Pittsburgh Legends of Jazz Award, African American Council on the Arts Rob Penny Lifetime Achievement Award, the 2009 Jazz Journalists Association (JJA), and the 2015 Jazz Heroes Award, among many others.
Aaron Mulenga is a Visual Studies Ph.D. student at the University California, Santa Cruz and research asssistant at the Institute of the Arts and Sciences. His area of study includes contemporary art of Africa, post-colonial theory and Africa studies. Mulenga is a multi-disciplined artist with a keen interest in sculptural forms and installation. He recently took part in the inaugural Stellenbosch Triennale (2020) held in South Africa entitled: Tomorrow There Will be More of Us. Mulenga’s art practice is part of his research process for his Ph.D.  Mulenga holds a B.F.A. from the University of Cape Town and an M.F.A from Rhodes University.