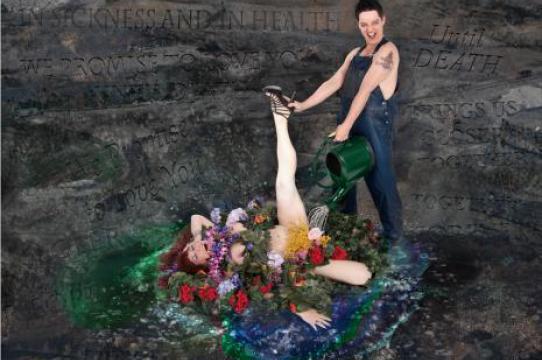 EXTRACTION, sponsored by T.J. Demos, A. Laurie Palmer, and the Center for Creative Ecologies, features an artist lecture program, film screenings, and field trips interrogating the current cultures of extraction.

Beth Stephens and Annie Sprinkle, Goodbye Gauley Mountain: An Ecosexual Love Story, 2013, followed by a presentation by the artists.

Goodbye Gauley Mountain, 2013 is a documentary film in which  protest, performance art, and sexuality come together.  Beth Stephens and Annie Sprinkle, two ecosexuals in love, return to their family home in West Virginia to help save the region from mountaintop removal destruction. The artists put their bodies on the line in the struggle for environmental justice, demonstrating how the fight against industrial extraction can be inclusive, sexy and fun, even in the face of environmental tragedy

Elizabeth Stephens is an artist, activist and professor of art at UC Santa Cruz. Her work explores sexuality, gender, and feminism. Her collaboration with Annie Sprinkle concentrates on what they call "sexecology," the intersections between ecology and sexology intersect in order to imagine a sustainable relationship between humans and the planet they inhabit. Stephens and Sprinkle have performed at the Museum Kunst Palast in Dusseldorf, Germany, The San Francisco Museum of Modern Art, and they have exhibited work at PS 1 in New York, the Reina Sophia in Madrid, Spain as well as in many other performance spaces, museums, galleries and festivals around the world. Goodbye Gauley Mountain: An Ecosexual Love Story is Beth Stephens first feature documentary film.

Annie Sprinkle is an internationally known multimedia artist who has toured theater pieces since 1989 to 21 countries. She is one of the pivotal players in the 80’s “sex positive feminist movement.” Her film, The Sluts & Goddesses Video Workshop: Or How to Be A Sex Goddess in 101 Easy Steps, played over 300 international film festivals and art venues, including the Guggenheim Museum. She’s been involved in dozens of documentaries and numerous features (Inside Deep Throat, The Naked Feminist, Monica Truet’s My Father is Coming, and Gendernauts,), and been in many TV shows such as HBO's Real Sex and The Sexual Revolution on the History Channel. In the 70's and 80s, Sprinkle starred in x-rated feature films; these experiences led to her producing, directing and starring in an award winning experimental film diary, Annie Sprinkle’s Herstory of Porn. Sprinkle earned a Ph.D. in Human Sexuality, and received the 2013 Artist/Activist/Scholar Award at Performance Studies International at Stanford. Currently her multi-media art projects are dedicated to making the world a more sustainable place and pollinating the budding ecosex movement.

Sunday, May 7
Farmworker Reality Tour in Watsonville with Ann López of the Center for Farmworker Families