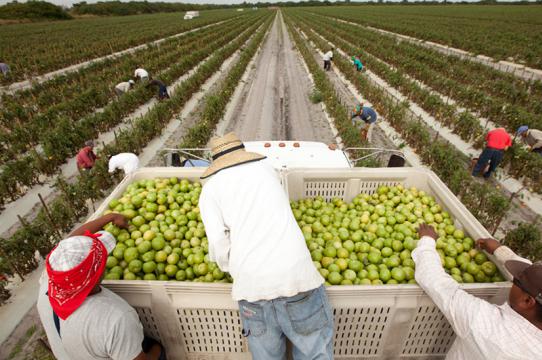 Join us from 5:30-7:30 pm for a screening of Sanjay Rawal’s Food Chains, 2014, presented with a talk by Dr. Ann López of the Center for Farmworker Families. This event is part of EXTRACTION, a research program exploring the industrial operations which abuse natural resources and thrive off of labor exploitation and racialized impoverishment.

This event is supported by Digital Arts & New Media. It is FREE and open to the public. Metered parking is available in the Performing Arts lot.

Food Chains explores the human cost in our food supply and the complicity of large buyers of produce like fast food and supermarkets. The narrative of the film focuses on an intrepid group of tomato pickers from Southern Florida – the Coalition of Immokalee Workers or CIW – who are revolutionizing farm labor. Food Chains premiered at the 2014 Berlin Film Festival and screened subsequently at the Tribeca Film Festival and Guadalajara Film Festival.

The film will be followed by Dr. Ann López, “Farmworkers and Food Production in California.”

Dr. Ann López is an emerita professor and has taught courses in biology, environmental science, ecology and botany in the biology department at San José City College for many years. She is an independent researcher whose research addresses the human side of the binational migration circuit from the subsistence and small producer farms of west central Mexico to employment in California’s corporate agribusiness. Dr. López has worked with over 33 farm worker families in the Salinas and Pajaro valleys. She has also studied 22 of their family farms in the west central Mexico countryside, and has received recognition and awards for her work.

Her book entitled The Farmworkers’ Journey summarizes the results, arguments and conclusions of her research and was published by UC Press in June 2007. In 2008 she was also chosen as one of Silicon Valley’s 100 most influential Latinos in the category of Technology, Health and Science by the Mexican American Community Services Agency (MACSA). In March 2008, her book received the Delmos Jones and Jagna Sharff Memorial Prize for the Critical Study of North America from the Society for the Anthropology of North America. In February 2012, Dr. Lopez and her organization won the Social Justice Award at the 32nd Annual Western Regional EcoFarm Conference in Asilomar. She was chosen as a Woman of the Year for 2013 by the National Association of Professional Women.  She was awarded the Human Agenda Ecological Sustainability Award in 2014 and the Community Action Board of Santa Cruz County, Inc., awarded her with the Community Game Changer Award in 2015.

Dr. Lopez’ research findings while interviewing central California farmworker families and their family members in Mexico were fundamentally disturbing and life transforming. As a result, she is actively attempting to create awareness about the Human Rights abuses that are endemic to every juncture of the migrant circuit. She has also initiated many projects on both sides of the border designed to alleviate some of the inordinate suffering experienced daily by migrant farm workers and their family members in Mexico. To this end, she and associates have created a nonprofit 501(c)3 organization on behalf of central California farm workers and their family members living on subsistence farms in Mexico.

Artists’ Lecture and Film Screening Series
*All events are on Tuesday evenings, 5:30-7:30pm, in DARC 108 at UC Santa Cruz

Sunday, May 7
Farmworker Reality Tour in Watsonville with Ann López of the Center for Farmworker Families