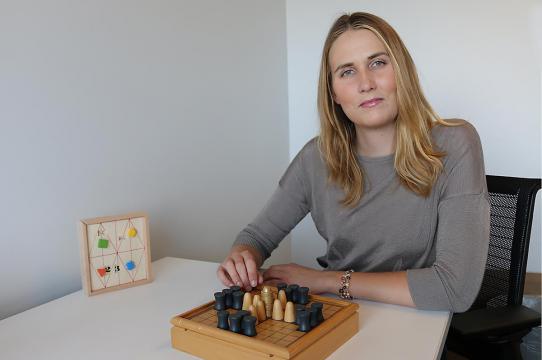 Mission: Admission is a mobile and web game designed to increase college going self-efficacy and college knowledge among high school students in historically underserved districts. Mission: Admission is a strategic, resource-management game with roleplaying elements played over a real-time week. Players build up a character’s skills and level-up curricular and extracurricular activities while aiming to meet in-game college application and scholarship deadlines over seven days. This game was released on Facebook in 2012 for a pilot study, then funded for a longitudinal study in 50 California schools through the Department of Education’s First in the World program that completed in 2017.

Life Underground is a digital research game made as an outreach project and funded by the National Astrobiology Institute. It is designed to teach middle school students about STEM careers in field science and as well as reinforce their learning of the scientific method. Players take on a role as a young science student exploring an underground environment in search of extreme forms of microbial life. As an investigator, the players experience the tools of the research team, conduct experiments on collected samples, and are mentored by senior scientist characters in a number of related fields.

The Witch is a digital game about the role language plays in shaping identity. In the game, the player chooses words to label their character in order to move through the social space of the narrative, but they can only choose from the words other characters say. Depending on the words the player chooses, their character is treated differently by the narrator and other characters within the story. While the main character of The Witch is grounded in fairytale tropes, the project explores themes of identity as a potential source of danger, security, play, and survival.

Chrono Cards is a set of digital and physical card games that guides middle school students in their demonstration of historical knowledge and practice of historical thinking skills. The historical content of the games covers the causes and early events of the first World War (Edition 1) and the American Revolution (edition 2). The games utilize active (and interactive) student interpretation to motivate content analysis through play, providingan opportunity for students to examine the historical context of specific important events from multiple perspectives and to make connections between motivations, actions, causes, and effects.