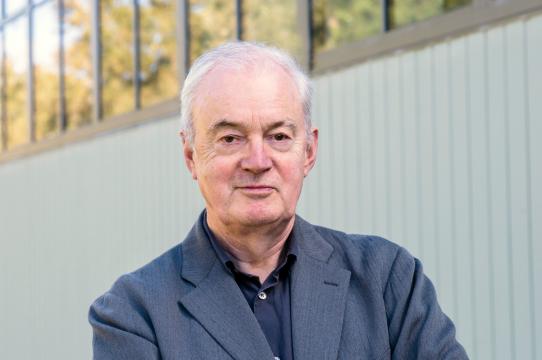 Mark Nash is a distinguished independent curator, film historian and filmmaker with a
specialization in contemporary fine art moving image practices, avant-garde and world
cinema. He holds a PhD from Middlesex University and an MA from Cambridge
University.

He is currently a professor at the University of California, Santa Cruz, where he founded
the Isaac Julien Lab with his partner and long-time collaborator, Isaac Julien.

Nash has taught widely: in the Department of Film, Media and Cultural Studies at
Birkbeck College, University of London; as a visiting lecturer at the Whitney Museum
Independent Study Program in New York; and at NYU as Adjunct Professor in the
Department of Cinema Studies. He was a Visiting Research Fellow at the Nanyang
Technological University of Singapore’s Centre for Contemporary Art and has taught at
Harvard both as an Adjunct Professor in the Department of Visual and Environmental
Media and as a Visiting Scholar in Afro American Studies. He was Head of Department
for Curating Contemporary Art at the Royal College of Art in London where he
developed the Inspire Program, a positive action MA pathway for curators from minority
backgrounds for which he raised £3MGBP from public funds.

As a curator, Mark Nash has frequently collaborated with Isaac Julien on numerous film
and art projects. He also collaborated regularly with the late Okwui Enwezor, including
on Documenta11 and on The Short Century: Independence and Liberation Movements
in Africa, 1945–1994, both in 2002, and most recently on ‘The Arena’ project at the
Venice Biennial 2015 which featured an epic live reading of Karl Marx’s Das Kapital.

More recently, he curated moving image exhibitions Viva L’Italia at the Museo Civico
Archeologico (2017) and The Coming Community (2018) both for Artefiera Bologna
which focused on the legacy of 1970s socialist culture in Bologna. In 2016, he worked
on a major international exhibition Yingxiang/The Shadow Never Lies with Joshua Jiang
(curator of the 4th Guangzhou Triennial, 2012) focusing on contemporary moving image
and photographic work for M21: 21st Century Minsheng Art Museum in Shanghai. In
addition to the publication of The Shadow Never Lies (the exhibition’s accompanying
catalogue), 2016 marked the publication of an edited work with a critical introduction by
Nash; it is entitled Red Africa: Affective Communities in the Cold War, London: Black
Dog Publishing.