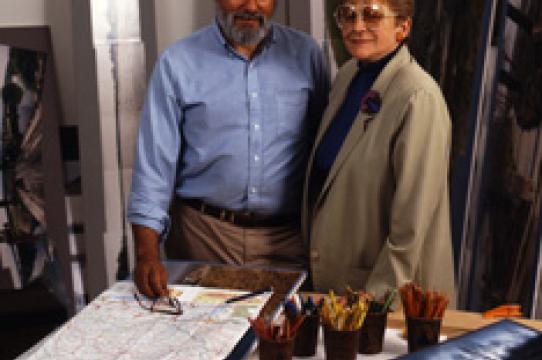 from the Force Majeure Series, a 50-year collaboration between the Harrison Studio and the Center for Art + Environment at Nevada Museum of Art

“The Force Majeure” means the inexorable force of human-forced global warming acting in transaction with our vast processes of extraction and CO2 production. These have impacted the ecosystem in terms of forests cut, topsoil depleted, a severe lessening of ocean productivity, and a vast chemical outpouring into the atmosphere, earth and water, that all together comprise what we see as an irresistible force. The term ‘The Force Majeure’ expresses a co-evolving set of circumstances, initially brought on or exacerbated by the processes of civilization, and increasing dramatically from the industrial revolution to the present. These co-evolving processes work against the well-being of both cultures and ecosystems as we now know them, imperiling the survival of both.

the work of art that we and the assembled team are designing.

The concept underlying this work seeks an adaptive response to the predicted temperature rise in the high grounds in the Sierra Nevada, which may be in the range of 5º Centigrade. Such a temperature rise will generate, in varying degrees, drought, flood, and species die-off, with probable unfortunate outcomes for the four rivers that flow down into the Great Basin on the east side of the Sierra Nevada. The same negative outcome appears inevitable for the thirteen rivers that flow into the Central Valley of California on the west side of the Sierra Nevada. The Harrison Studio defines the high ground in terms of the area where the rivers begin and the shapes of the watersheds begin to manifest. The work will, in the long term, choose approximately seventeen sites on the high grounds of the thirteen principal watersheds on the west side and the four principal watersheds on the east side.

The intention of this initial work of art is to explore and then create the methodologies that might demonstrate how to buffer the drought and erratic weather, which will impact the Central Valley of California as well as the high grounds of the Sierra Nevada.

We believe that a Sierra Nevada response in the “now,” of the kind we propose, can forestall the great social and economic difficulties that the predicted rise in temperatures will cause, while at the same time generate a badly needed new botanically-based industry. Essentially, we're arguing for design from a highly probable future, backward to the immediately knowable present.

The work of art: studio practice

As artists we do not consider Sierra Nevada: An Adaptation as a stand-alone piece, but rather part of a body of work that sets out to look at and propose adaptations at scale, not only in the nearby high grounds, but in other regions, such as the Tibetan Plateau and in particular the world ocean. However, we consider the Sierra Nevada work of greatest importance, since it has the possibility of being validated on the ground and re-validated, watershed by watershed. If so, it will have performed its function as a work of art.

The work we propose for the Sierra Nevada will include a 44-foot long floor photograph of the whole Sierra Nevada mountain range. The intention of this rather large image is to give the viewer a feeling of flying over the range, as well as one of walking the range. The image will have two drain basins accentuated, the first, Independence Lake and the Truckee watershed, and the adjacent Yuba River watershed, as a potential second proposed site. On the walls around this first room of the exhibition will be drawings of the 17 Sierra Nevada watersheds, with notes on the work already being done in them, principally existing restoration efforts. Tentative adaptation sites will be selected and will appear at the top of the watershed drawings. The intention of the first room is to set the stage for the scale of thinking and action that the piece proposes.

A second room will contain three digital animations predicting two global warming futures for Independence Lake and its watershed and a body of aerial photographs. The content of the three animations will be as follows:

1.     The first animation projects what will happen if nothing is done except following the typical conservation regime. The assumed conditions are rapid temperature rise coupled with much more erratic rainfall. These may in turn increase erosion in the watershed (reducing its ability to hold and release waters) thus increasing negative impacts on Independence Lake. The result could be that cheatgrass moves in and bark beetles invade, creating uncontrollable fire risk and reducing biodiversity.

2.     The second animation is based upon the same assumed conditions with resultant die-off of species, but beneficial species would be encouraged to move upward.  Methodologies that do not rely exclusively on accident and chance would be employed. These interventions would tend to maintain biodiversity, resist drought, maintain the water-holding properties of land, and work against potential erosion. There is no guarantee that this kind of species ensemble would move up on its own, and therefore groupings might be selected to respond to the predicted losses. We call them beneficial ensembles.

3.     The third animation emerges from a traditional meaning of a cultural landscape. It is a landscape that serves both the needs of culture and the needs of nature and is typical for many of the landscapes generated over time in both Europe and Asia, but with modification. The landscape we envision encourages certain grasses and shrubs that function for both browsing and grazing species. It is also designed to generate topsoil, sequester waters and function in part as an open canopy forest, where the forest itself first sequesters carbon then is very selectively harvested, using the principles of silvaculture. The cultural landscape we envision enfolds biodiversity into itself.

The site would be monitored for purposes of comparison and also to interrupt or resist the emergence of any destructive exotic species. The two animations will reflect the present discussion in ecological circles whether to assist species migration or not. If possible, an equivalent animation strategy set at the high end of the Yuba River watershed, which begins at the other side of the Independence Lake ridgeline, will be employed in a future exhibition.

These three models; leaving nature alone to find its way, so to speak, positive intervention from the perspective of enhancing ecosystems and, positive intervention from the perspective of generating a cultural landscape that enfolds into itself biodiversity will be played against each other with the intention of forming the basis for other drain basin research. The work assumes a research site at the high end of each of the seventeen major basins that compose the Sierra Nevada. We also believe that research into paleoecology to determine what kind of ecosystems existed on these sites under similar climactic conditions will yield useful insights for this proposal. We understand that there will be a diversity of solutions and separate studies required for each drain basin. The reason for this is that the upward movement of species, from both the low grounds and peripheral watersheds, might be sufficient to maintain healthy ecosystems with no interference required in some drain basins. In other cases, some high ground sites would be so severely impacted that a much more proactive approach would be needed, perhaps similar to what is now known as analog forestry.

In this work, we suggest incorporating the analog forestry research of Ranil Senanayake, which is a system of planned and managed forests designed to mimic the ecology of preexisting vegetation, and are also intended to maximize economic benefits.  Permaculturist Joel Glanzberg, who is part of our research group, works from the question of “how little can do how much?” In other words, what kind of minimally intrusive change can be encouraged? We are also looking at the problematically named “invasion biology” research. After all, Hannibal’s elephants brought over the Alps a fair amount of the seeds that successfully created niches for themselves in the European meadow systems, enhancing both their bio-diversity and their ecological stability.

While we conclude that no single approach to a complex system like the high grounds of the Sierra Nevada is sufficient to meet all exigencies, we do suggest that enough research exists, and enough success on the ground been demonstrated, that useful models are available. The one general element that we suggest be constant is that grasslands, perhaps in some cases morphing from shrublands, in transaction with open-canopy forestry might well work as a dominant feature across the high grounds of the Sierra Nevada. Were this done, drought and desertification would be mediated, erosion reduced, biodiversity encouraged, and the productivity of land for water generation and herding increased.

Read the attachment for more on the Force Majeure Series.