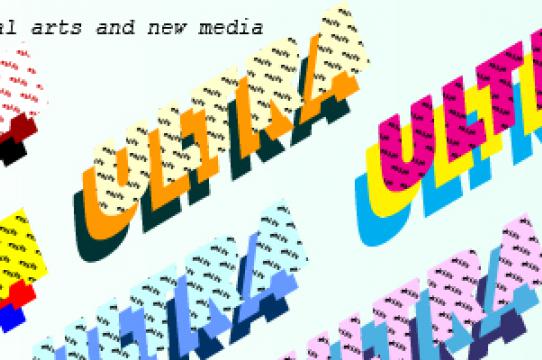 The 2017 graduates from the Digital Arts and New Media (DANM) MFA Program are presenting their work in the exhibition, ultraSHIFT.

Matthew R.F. Balousek's Opening the Horse is a method for queer game design. It is enacted through a series of tabletop games, each attempting to function as a sort of rhetorical Trojan Horse. Through their respective fictions, the games attempt to entice the player as well as conceal their intentions as rhetorical objects. After being exposed to the formal system which encodes the procedural rhetoric, the games shift their fictional contexts such that the connection to the queer rhetorical context is made more direct in order to prevent the communicative act from failing altogether due to misinterpretation.

In SL Benz's Auratic Interpreter, the desire for a holistic interpreter, or to be an objective empath, is a desire to move beyond ironic detachment, habitual consumerism, scientific reductionism and religious naivety. It reflects a desire for grounding the being phenomenologically, with one’s possessions as part of the politics of self. Benz’ installation is an attempt at mediating invisible knowledge, however anecdotal or trivial, revealing the multiplicities of possible narrative. Part divination, part polygraph technology, this machine reads the aura of inanimate objects and translates it to a visual record. This piece anticipates the need for increased data/memory retrieval in a post-material future.

Finley Coyl's Trace is an interactive fiction unraveling a certain authority of the American past. Trace is a narrative questioning intersections of whiteness and queerness. Trace is a non-linear tableau probing the remembrance of historical events across generations. Trace is all of the above. This project is navigated from the experience of three characters around select historically pivotal events. A combination of text, illustration, video and internet sources, Trace draws on different modes of temporality and media representation in an attempt to examine the frameworks in which particular stories are told. This project is built in Twine, a free, open-source hypertext game platform, with some additional HTML5/CSS.

Katie Green's A Place to Be is a game that contemplates death and the cycles of life through a simple digital simulation. Players are presented with a dreamlike natural world, and control an living resident. They then explore, earning points for making discoveries and surviving. However, this is only part of a much grander cycle. A creature’s time is ever so limited. There’s only so much a single individual, limited by their bodily circumstances and sensory abilities, can accomplish before they play out their role. Nonetheless, the demand to drive this cycle dares players to strive towards their own purpose.

Marguerite Kalhor's the this: artifice + superfice: two scoops of banality is a series of works which highlight the sleepwalk-waltz of the user and their associated social media networks. Using the selfie as an easily produced and understood mechanism of virtual self-fashioning and communication, Kalhor explores its use as a tool of visual deception rather than a subject of personal celebration or a narcissistic phenomenon. With an assortment of image and sound editing software and the idiosyncratic content of kalhor’s social networks, the this aims to construct alternative narratives to the banal and repetitive nature of the socio-virtual sphere.

Darrell "Mc" Ruppel’s Rideables are a series of electronically-powered performative sculptures that break down social barriers surrounding community, social engagement, the mis- and under-represented, and the underprivileged through a developing social art practice. These works serve as a platform for dialogue and interaction across diverse groups of the Santa Cruz community. Come watch videos of the processes involved in creating these sculptures, play multimedia arcade games that represent West Cliff and East Cliff, and step onto and navigate a full-scale Rideable to experience the mind altering fun that these collaborations create!

Scott Tooby's Embedded Soundscaping is an interactive sound installation exploring how audio-reactive technology can be applied in creative and scientific contexts to enable deeper understanding and connection to the world through sound. Through the combination of machine listening and embeddable computing, the installation features the Sonic Mirror, a new electronic instrument that selectively records and transforms the sounds of its environment into musical soundscapes. Additionally, the instrument audifies the movements of an experimental robot made by engineering researchers at UC Santa Cruz to reveal the physical dynamics of digital materials – a new material technology developed by NASA’s Ames Research Center.

ultraSHIFT exhibition and symposia are free and open to the public.
Thursday, April 27– Sunday, April 30, 2017 About DANM:
The Digital Arts and New Media (DANM) MFA Program serves as a center for the development and study of digital media and the cultures that they have helped create. Faculty and students are drawn from a variety of backgrounds, such as the arts, computer engineering, humanities, the sciences, and social sciences, to pursue interdisciplinary artistic and scholarly research and production in the context of a broad examination of digital arts and cultures.
danm.ucsc.edu